Dejounte Murray is finally becoming the star the Spurs always envisioned him to be, but remains supremely underrated. His career highs are a testament to his potential and he has earned himself another contract with more years on it than any other player in NBA history at age 24. The stats may not show it yet, but this could very well be one of the best signings for both parties involved.

Dejounte Murray is becoming the star the Spurs always envisioned but remains supremely underrated. The Spurs are now a team that has found success with him as their point guard and he has been able to develop into one of the best players in the NBA. 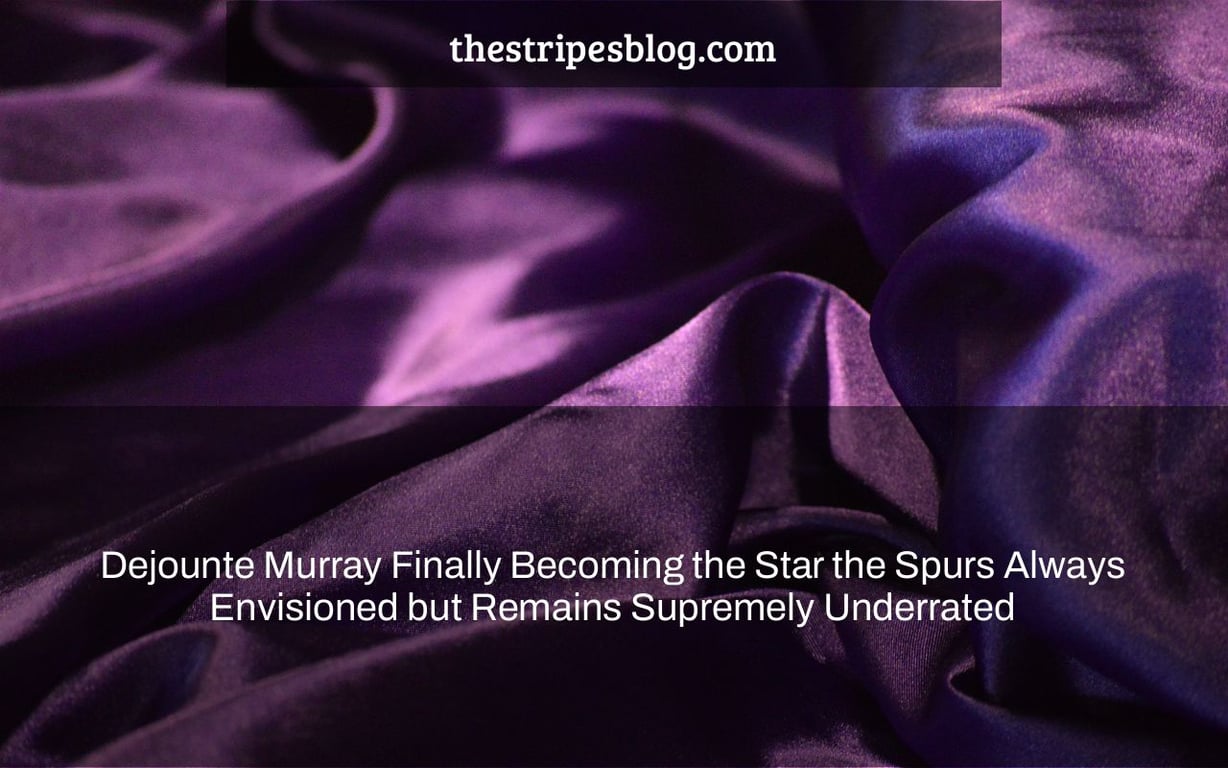 The San Antonio Spurs thought they had found another gem late in the first round when they chose Dejounte Murray out of the University of Washington in the 2016 NBA Draft. Murray took a while to come up to those lofty expectations, but he’s finally enjoying his greatest season.

Murray’s All-Star-caliber performance, on the other hand, seems to be going under the radar, in pure Spurs manner.

While rumors of Ben Simmons accepting a trade to San Antonio have dominated the news in recent weeks, Murray has demonstrated that he is the next great Spurs player. It’s time to send flowers to the Seattle native.

Dejounte Murray’s talent has been awaited by the Spurs for a long time.

Murray found himself as the starting point guard on a squad that had Parker, Manu Ginobili, Pau Gasol, and LaMarcus Aldridge — plus Kawhi Leonard, who played only nine games in 2017-18 and subsequently sought a trade — The second-year guard proved his worth as a taller, playmaking guard, earning him a spot on the All-Defensive team as well.

Murray has been lauded as the team’s next great point guard by Parker and Pop, who claimed in 2019 that the youngster’s drive to learn and be taught reminded him of prior Spurs heroes.

According to The Undefeated, Popovich stated of Murray, “I simply enjoy the fact that he learns things up so rapidly.” “And you can go after him like I went after Tony Parker, and it will help him improve.” It is something he desires. He isn’t looking for an excuse. He’s not scared to admit when he’s made a mistake. And you can tell when someone is like that, they’re going to grow.”

Murray was a hard worker from the start. However, an ACL injury forced him to miss the whole 2018-19 season. Murray’s health was a concern for San Antonio in 2019-20, as he averaged just over 25 minutes per game.

Last season, Pop and the Spurs began to remove the Band-Aid, and Murray began to realize his full potential. He had a double-double season, averaging 15.7 points, 7.1 rebounds, 5.4 assists, and 1.5 steals, providing San Antonio a two-way point guard capable of coordinating the offense and protecting the perimeter.

Murray is deserving of All-Star honors.

During the Spurs’ victory against the Los Angeles Clippers on Monday, Murray became the first player in Spurs history to post six triple-doubles in a single season. He scored 24 points and grabbed 13 rebounds while giving out 13 assists. For good measure, the 25-year-old also had five thefts.

The performance provides fascinating insight into how Murray affects the game in almost every manner. In pick-and-roll, he sliced between defenders and finished with floaters and runners. He stunned Clippers big man Serge Ibaka with a hesitation move at the free-throw line on one such pick-and-roll before dumping a perfectly-timed bounce ball to Jock Landale.

Murray’s foresight and prediction are underappreciated. Whether he decides to pass or attack the basket, he watches things develop in the half court and understands how to generate angles. In addition, he’s shooting the ball with greater assurance.

Murray made 4-of-6 3-pointers against the Clippers, including one off the dribble and in transition. This season, he’s averaging 4.0 attempts from beyond the arc, shooting almost 35%, which is a career best. 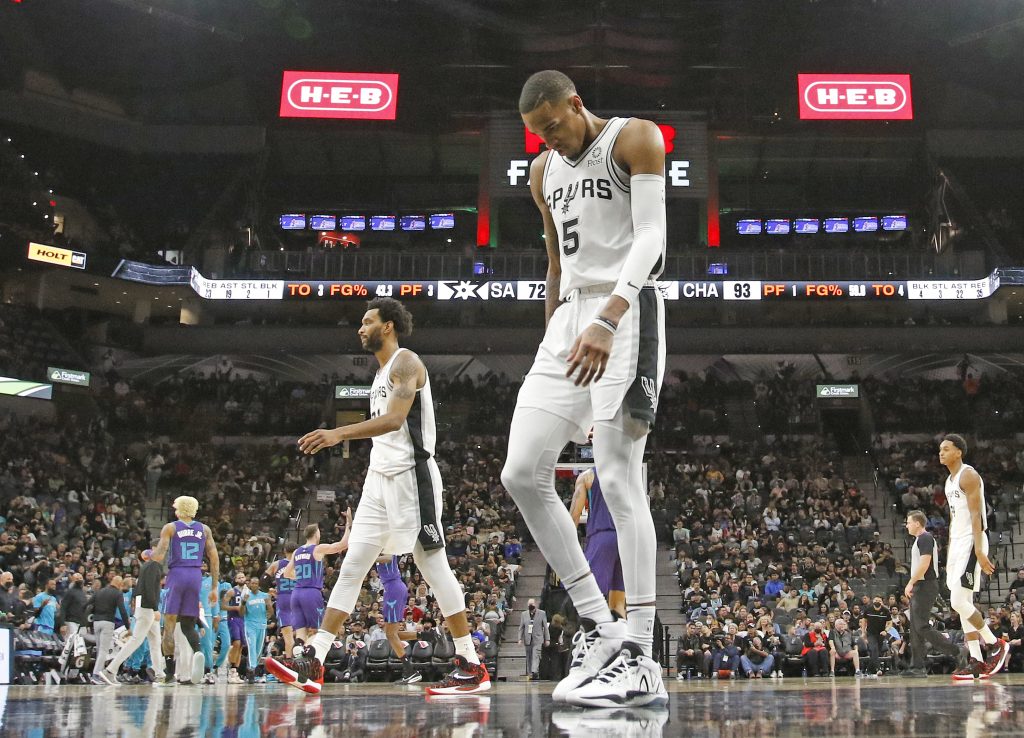 On December 15, 2021, Dejounte Murray returns to the bench after a Charlotte Hornets basket during a game | Ronald Cortes/Getty Images

The Spurs aren’t the same Western Conference behemoths they used to be. Popovich’s coaching career is coming to an end, and one of his former players might take over and usher in a new era of basketball in San Antonio.

Murray does, however, head an exciting bunch of young players who should be able to compete shortly.

Winger in his second year Devin Vassell provides the Spurs a 3-and-D winger with potential as a transition creator. If he can start scoring off the dribble, he’ll truly come into his own. When it comes to scoring off the dribble, Derrick White has been doing it more often lately. He also has a 5.0 assist per game average. Then there’s Keldon Johnson, who leads the NBA in 3-point shooting at 46.7 percent while averaging 15.0 points and 6.5 rebounds.

San Antonio’s backcourt and wing players are among the best in the league. The Spurs have the right composition to compete, with Jakob Poeltl playing excellent inside defense and starting to take on more offensive responsibilities. They’re presently on the outside of the postseason picture at 12-18, but with a 15-15 predicted win-loss record, it’s all uphill from here.

Murray is there in the middle of it all. This season, he’s having one of the best guard seasons in the league, and he deserves to be recognized for it.

Dejounte Murray has been a key part of the Spurs success this season, but despite his impact on the team, he remains underrated. Reference: dejounte murray trade.